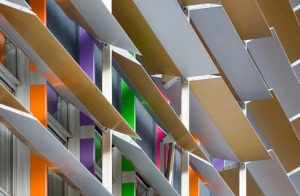 Who says “too many chefs spoil the broth”?  In the case of Bitter Medicine the saying certainly doesn’t apply, as this absorbing radio play about friendship, betrayal and rivalry was written by not one, but five students from Central Foundation Girls’ School.

In the play we follow Zaneb as she is picked to try out for the Olympics, over her best friend, Sarah.  Sarah acts like she doesn’t care…but does she really?

What made this radio play stand out was the powerful use of language.  When Zaneb unfairly loses her place in the Olympics, rather than saying “What a shame”, she uses the coarser phrase “It’s crap news.”  This strong vocabulary shows the strength of the character’s emotions, adding passion and realism to the radio play.  Another effective use of language was the input of slang.  Words like “Waddap” (what’s up) were used successfully to add to the realism of the play.

Another outstanding aspect of Bitter Medicine was its plot. Two friends are competing to be picked for the GB Olympic team; one makes it, and one doesn’t, creating a bitter rivalry between the former friends. Sarah, who doesn’t make the team, later appears to spike Zaneb’s drink.  What’s effective about this aspect of the plot is the sense of mystery; you never actually get to find out if Sarah did spike Zaneb’s drink.  Also, the use of performance enhancing drugs is a serious issue in the sporting world that this play has cleverly commented on.

In conclusion Bitter Medicineis a great radio play and its writers certainly deserve a medal. Listen to it yourself by clicking on the link below, where you’ll find recordings of all the radio plays performed as part of BBC London’s Drama in the Mix talent showcase.

I am an English teacher at The City Academy, Hackney.
View all posts by Miss Thomas »