Andy Murray’s encounter with Roger Federer brought to a close an eventful Wimbledon 2012. The tournament was affected by the rain; however Murray’s phenomenal performances kept the atmosphere light and cheerful. In Murray’s journey to the final he overcame the challenges of Marcus Baghdatis, David Ferrer and Jo-Wilfried Tsonga where he grew stronger as the games went on.

However against Federer he came out with a very different approach as he attacked his opponent from the start. The Swiss was startled and soon lost the first set 6 – 4.Unfortunately Andy Murray’s rhythm was disturbed when the game was delayed due to a sudden downpour of rain. After half a hour break the roof was finally closed and the players were back on the pitch. The break had allowed Roger Federer to gather himself and prepare himself mentally. The first game saw the Swiss take control and re-establish himself in the game. He was back to his best as he ended the 2nd set 7 – 5 by serving an 128 mph ace. From then on Murray was in trouble knowing that if he was to still be the Wimbledon champion he would need to produce something spectacular. 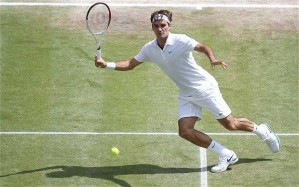 To make things worse Murray was carrying an injury and therefore his movement was limited. Federer used this to his advantage forcing his opponent to cover the whole court. His wide range of shots allowed him to throw in the backhand slice and the drop shot making life practically impossible for Murray. As a result the six time Wimbledon champion was edging himself ever closer to his seventh as he secured the third set 6 – 3. Andy Murray fought valiantly till the end keeping the game alive thanks to some powerful serving and aces. However his fate was inevitable and Federer eventually got his Championship point. Federer’s bullet serve was returned by Murray but

returned just out. The ball whistled past Federer who dropped to the ground as his achievement began to sink in. In the interviews an over the moon Federer described it as his Greatest Wimbledon yet whilst an Emotional Andy Murray shed tears as he thanked the fans for their annual support. The Scot definitely did Great Britain proud but meanwhile Fred Perry’s victory 76 years ago remains Britain’s only ever winner. Roger Federer wins by 3 sets to 1: 4 – 6, 7 – 5, 6 – 3, 6 – 4.