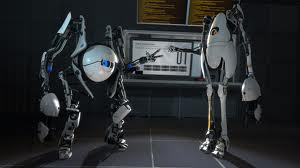 In Portal 2 – a sequel of an excellent game – you wake up after an unknown time has passed in what seems to be an old fashioned hotel room with a robotic voice as your timekeeper. At the end of Portal, you kill GLaDOS and escape into the outside world only to be dragged away by an unidentified being. In the second instalment of the games your adventure starts twice: first, fifty days after killing the cynical GLaDOS; second, at an unknown period of time, by a small, spherical robot who goes by the name of Wheatly. The game play contains elements of suspense, comedy and drama all while you, the players, try to overcome a series of testing challenges. I personally enjoy this feature of the game as it allows the player to follow the story line while having a laugh about all their in-game accidents.

In Portal 2 you have to solve puzzles similar to its predecessor. However this time: the plot is thicker; more characters are involved; mysteries are solved and more lemons are burnt*. In Portal 2 you start in the same way as before; without the portal gun. I think that that is a good element as it helps the player think for themselves and not just play aimlessly. All in all, I think that Portal 2 is a great game and has very challenging levels; it can be hard and to attain all of the achievements. This is a good component because a simple game isn’t as satisfying, and also games with achievements give players motivations and increase the attraction of the game

*- No lemons were harmed during the making of this

I love listening to music and wathcing films.
View all posts by matteomsf »